2023 Toyota 4Runner: Ignore the Hype and Buy the Current One

If you quite fancy buying a new Toyota 4Runner, don’t be concerned by the hype surrounding an all-new 2023 Toyota 4Runner that could be announced in the summer. If you sit on your hands waiting for official details of the all-new sixth-generation Toyota 4Runner to break cover before deciding between the current one and waiting for the new model, you could miss out in several ways.

Even though Toyota has been pretty tight-lipped about an all-new version of the 4Runner, there will be an all-new, sixth-generation model for the 2023 model year that could leave the factory later this year.

I completely understand why anyone who might be close to pulling the trigger on a 2022 Toyota 4Runner might be concerned about what an all-new model will be like.

You could have concerns about what it might do to the eventual resale value of your 2022 model. You could feel like you’ve landed yourself with an old-fashioned model when something new and shiny is available. You might even feel that the new model is better than what you’ve just bought. I have answers for all that and more, but let’s look at what we know about the all-new 2023 Toyota 4Runner.

We already have a new 2022 Toyota Tundra pickup truck with an available hybrid powertrain, five suspension options with rear coil springs, a maximum towing capacity of 12,000 pounds, and the latest standard safety and convenience features. We have also seen plenty of images of the all-new version of the Sequoia SUV.

The Tundra and Sequoia share a platform that will also be used for the next 4Runner, so it’s almost certain that the sixth-gen 4Runner will arrive as a 2023 model in late 2022 or early in 2023. An entirely new platform means the new 4Runner will differ from the current model, possibly quite considerably.

Going by the new Tundra and Sequoia, the 2023 4Runner will probably look more rugged, squared, and a lot like the Tundra and Sequoia! There’ll also likely be a hybrid engine option, although that’s not entirely certain.

The 2023 4Runner will look much more modern than the current model, and I’d like to think it will drive better. And by that, I mean on-road rather than off-road because the current 4Runner is seriously capable when the pavement runs out. It’s just a bit rubbish if you’re on the road.

The towing capacity is likely to improve with the new 4Runner, and the interior is sure to be more contemporary and more comfortable. The safety tech will significantly improve from the 2022 4Runner, so there will be plenty to look forward to if you hang on for the new model.

Why you could be in for a long wait

In the current climate, putting off a new vehicle purchase to wait for a new model before it has even been announced is a bit of a mug’s game. How’s that working out if you decided against buying a C7 Corvette a few years ago when it was still in production to wait for the new C8 to land?

The entire auto business is struggling to meet demand all around the globe, and it’s hard to say when things will get any better. The microchip shortage is still a problem, and many automakers are still struggling to catch up with new car orders left over from 2021.

Let’s say you are determined to wait until the all-new 2023 Toyota 4Runner gets announced. First, some glossy official images and one or two tantalizing details will be revealed. There may even be an appearance at one of the major auto shows. Next, the new 4Runner will have press days where journalists get invited to test drive it, and that’s when the order book gets opened.

If you want to wait until you get to test drive the new 4Runner for yourself, which would be perfectly understandable, you could be waiting until the end of 2022 or into 2023. By then, many people will have already taken the plunge and placed advanced orders ahead of you. If the 2023 4Runner follows that route, your order might not arrive with you until late 2023 or even 2024!

Be careful what you wish for

I would have suggested a Ford Bronco, but good luck getting your hands on one of those anytime soon. The Bronco situation proves my point about how long you could end up waiting for a new 2023 4Runner.

Another piece of evidence I’d like to present is the Land Rover Defender. The old one is a stone-cold classic, and it has an army of admirers the world over. It was understandable that the first all-new one almost since the end of the Second World War would be a big deal, and it was. Still, it’s so far away from what Defender enthusiasts love about the nameplate that JLR may as well have ditched the Defender name and gone with a new one.

I hated the old Defender even when I was making money selling them. I absolutely love the new one, and that’s the point. Never in a million years would I have bought the old model, but I’d certainly have the new one if I could afford one. Likewise, a committed old-school Defender enthusiast probably wouldn’t go anywhere near the new model. That could be the same with a new 4Runner.

The current 4Runner has been in production since 2009, which means Toyota is pretty good at building these by now. It might be an aging design with an equally aging engine, but it’s tried and tested, and any bugs and wrinkles there may have been in the past have long been ironed out.

How confident are you about the potential reliability of an all-new 2023 Toyota 4Runner that is new and infinitely more high-tech than the current model? I’d trust a 2022 model to get me in and out of the wilderness, but would you feel the same about an all-new model? I know it will have undergone hundreds of thousands of hours of testing before it goes on sale, but nothing finds a new vehicle out more than putting it in the hands of the public.

Once again, I’ll refer you to the Chevrolet C8 Corvette and the new Land Rover Defender. Both are sensational vehicles, and both are incredibly desirable and in high demand. However, you could almost do with ordering two of either, so you have one to drive while the other one is in the shop getting fixed under warranty!

Should you wait for the 2023 Toyota 4Runner?

You could be right if you like the current 4Runner, but you think you’ll like the all-new 2023 4Runner even more. However, you could also be very wrong, and the new one might be such a departure that it may not have the charm and charisma of the current one.

I’d say you may as well wait and see in regular times, but we’re not in regular times with the auto industry. As I stated above, waiting a couple of months to see what the new model is like could translate into a two-year wait to get your hands on one.

If you like the 2022 Toyota 4Runner enough to consider buying one, go ahead and buy one. Even if you love the new one when you see it, you’d probably want to change your current one after two or three years anyway. You should be able to walk into a showroom and buy one by then, and Toyota will also have had a bit of time to iron out some of the inevitable gremlins.

Is the Ram TRX a Good Daily Driver? 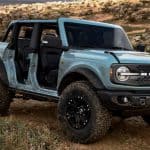