With eight generations so far and counting since they first appeared back in 1953, there are plenty of used Corvettes out there for you to choose from. But one of the things you have to consider before buying a used Corvette, especially an older model is, are Corvettes reliable?

In general, the Chevrolet Corvette is not a particularly reliable used car, but there is considerable variation between different model years and generations. While any used car can turn out to be unreliable, especially if it hasn’t been well maintained, the Chevy Corvette has a pretty poor overall reputation for reliability. In fact, Consumer Reports names the 2022 Corvette as one of the top 10 least reliable cars with a reliability score of just 13 out of 100.

Of course, Corvettes are extremely desirable cars and every one of the eight generations has its fans as well as its detractors, but which one should you look to if reliability is a big concern for you or you working on a tight budget without a lot left in the kitty for ongoing repairs? And as a new Corvette is a rare beast these days, plenty of buyers will be looking for used models.

If you’re in the market for a first-generation C1 Corvette then you must have pretty deep pockets, to begin with, so I’m not sure reliability will really be a deal-breaker for you. Unfortunately, despite some C1 Corvettes selling for upwards of $200,000, this highly desirable classic car isn’t particularly reliable, or especially fast for that matter.

The first C1 Corvettes were hand-built which might make you think they would be of a superior quality to mass-produced cars of the time, but that’s not the case here. The bodywork leaked when it rained, and sometimes the doors would open when the car was moving. If the build quality was that bad when they were brand-new, can you imagine what the reliability would be like after all these years?

C2 Corvettes were plagued by several problems. These included the rear suspension failing over time due to wear, mechanical failure of the washer pump assembly, faults with the electric headlights due to weather exposure, leaky door seals, sagging floorboards, and turn signal cam failure.

The good news is there were no major issues reported with the engines, although the engine of any car of this age is likely to have its issues from time to time.

The third-generation C3 is probably my favorite Corvette body shape, but even though the bodywork is fiberglass rather than steel it can still be this car’s Achilles heel. As it ages, fiberglass can suffer from all sorts of problems such as crazing, stars, ripples, cracks in the wheel arches and paint shrinkage. Restoring the bodywork to its former glory is expensive, and the extensive steelwork underneath it isn’t much better either.

Rust is the big issue with the steelwork, and as well as the chassis, the door frames and “birdcage” that connects the sills, doorposts, screens, and roof bridge can also be severely compromised by rot. It would be easy to fall for a bargain-priced C3 Corvette when you see one for sale, but get someone who really knows what they’re looking for to give it a once-over before you even think of paying out good money for one of these.

A fourth-generation C4 Corvette might not look as sexy as its C3 predecessor, but they were a remarkable improvement when it comes to overall quality. Although Chevy didn’t ditch the fiberglass body panels for steel or aluminum, it did opt for a molded plastic that is much more durable.

Things to look out for mechanically are sudden stopping of the engine, loose or worn-out steering wheels, airbag sensor faults that cause the warning light to appear on the dash, or the low coolant indicator being on all the time due to a faulty sensor.

The fifth-generation C5 Corvette doesn’t have any really major problems that are well-known but it does have a lot of niggly little things that can result in a long to-do list when you buy one used. The C5 was the first Corvette to feature the LS engines which are known for their reliability, so that’s a really big check in the positive column for the C5.

However, the smaller things that can cause headaches include water intrusion, ABS module failure, problems with the steering-wheel lockout system, an issue with the jacking points, original seats that wear out very quickly, and several rattles and other annoying sounds from Targa tops, steering wheel, and manual transmissions.

As well as being fast, fun to drive, and pretty good-looking, the C6 Corvette also has a reputation for being very reliable as long as you take proper care of it and stick to a decent maintenance routine. Plenty of C6 Corvettes have passed the 200k-mile mark and are still going strong.

The few problems you might want to watch out for before committing to buy a C6 include faulty valve springs that can affect performance and the way the car drives, cloudy headlights, CD changers that won’t load, play or eject CDs, and those constantly annoying airbag warning lights.

The airbag light could be on just because the connector has been unplugged when the seat has been moved, but the sensor itself that is located underneath the power driver’s seat is usually the culprit, and replacing it should solve the problem.

If you are big on maintaining originality, the most common problem associated with the C7 Corvette is going to be an issue for you. That’s because the C7 is renowned for cracked and warped wheels. GM decided to go with the cheaper cast aluminum alloy wheels for the C7 rather than the more hardwearing forged alloy wheels, and the result was a widespread problem with cracked and warped rims that GM tried to claim was due to drivers hitting potholes.

The C7 model years to avoid are 2015 and 2016 due to poor quality paintwork that’s prone to bubbling and transmissions that don’t always like shifting, but the 2016 is the one you should probably avoid due to engine problems, body integrity issues, and faults with the fuel system, electrics, suspension and even the exhaust.

It’s hard to speak confidently about the C8 Corvette and its reliability so early in its lifecycle. The C8 is an absolutely stunningly beautiful mid-engine sports car that drives every bit as good as it looks and you still have to join a waiting list to get your hands on a brand-new one.

It’s still early days for this model, but there were four recalls issued in 2020 for the first C8s that were for faulty seat belt retractors, electronic brake sensor problems, the frunk lid flying open while moving, and the frunk release button malfunctioning.

However, the highly influential Consumer Reports says the 2022 Chevrolet Corvette Stingray is in its bottom ten vehicles for reliability in 2022 with a reliability of score of just 13 out of 100. In fact, that makes it the fifth most unreliable 2022 vehicle as far as CR is concerned.

Which used Corvette should you buy?

If you want a Corvette and you want one that’s going to be as reliable as possible it looks as though a good C6 is going to be your best bet. The C6 hasn’t reached classic car status yet so you should be able to get one for a reasonable price, and it’s a lot closer to today’s cars than something like a C3 which could be hard for you to live with if you’re used to modern cars.

You have to keep in mind that the Corvette is first and foremost a sports car, and that means compromise if you want to use one as a daily driver, even a 2022 model. These are cars that are best bought as second cars, collector’s items, investments, or just as toys. Always allow for more than just routine maintenance and do what you can to buy a good one, to begin with. 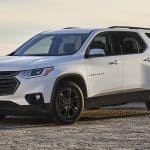 Why You Should Buy a Suzuki Samurai – if You Can Find One!