In my experience, vehicles as desirable as the 2022 Ford Bronco can sometimes make buyers blind to their actual needs and whether the vehicle in question is the most suitable for them. It’s easy to understand that so many people want a Ford Bronco, but is the 2022 Ford Bronco towing capacity enough for what you need your new vehicle to do?

You can tow a boat with a new Ford Bronco, but you’ll need to make sure the boat isn’t too big for the maximum towing capacity of the Bronco, which is between 3,240 pounds and 4,500 pounds, depending on the specification. For example, a light bass boat won’t be a problem, but a substantial powerboat with a couple of massive outboard engines on the back might be too much.

Unlike the F-150, where the Raptor doesn’t have the towing capacity of some models in the standard range, the 2022 Bronco Raptor is the Bronco you need if you want the version of this much sought-after that can tow the most.

What boats can you tow with a Bronco?

There are loads of boats you could tow with a 2022 Ford Bronco, but it’s no use just looking up how much the boat weighs to decide if you can legally tow it with your lovely new Ford Bronco. The boat’s weight is one thing, but you also have to consider the weight of the trailer, engine(s), and any ancillary equipment you have inside the boat while you are towing it.

If I’m honest, when you start to add the trailer and engine to the dry weight of a boat, that 3,500-pound capacity of most Bronco models doesn’t sound like a lot. Even the 4,500-pound maximum trailer rating of the Bronco Raptor will severely limit which boats you can go for, so you might have to rethink things if you already have a boat, and the GCWR would be greater than 4,500 pounds.

Of course, if you have a sailboat or a rowboat that doesn’t have an engine, that would allow you to tow a heavier boat and trailer than if your chosen boat is powered.

A Glastron 205 GTS is a popular boat you might want to tow behind your new Bronco, especially as it’s a cool-looking bowrider that would fit nicely with the Broco aesthetic. The 205 GTS has a dry weight of 3,010 pounds, but it’s almost 22-foot long, and it would need a trailer weighing somewhere around 1,000 pounds.

That puts you at 4,010 pounds, which means the Raptor is the only Bronco up to the job before an engine gets put into the equation. You could get an outboard engine weighing less than 490 pounds, but it wouldn’t make a 22-foot bowrider much fun.

On the other hand, something like a Macgregor 26 is a 25′ 10″ sailboat with a dry weight of 2,250 pounds. It doesn’t need an engine, so the 1,250 pounds you have to play with for a trailer would be more than enough, and even a regular Ford Bronco could handle that.

Should you buy a Ford Bronco for towing a boat?

I know it’s probably a tempting idea to own one of the coolest new SUVs around and imagine yourself heading off with family or friends to the ocean or lake with an equally desirable boat in tow. Unfortunately, if you’re going to stay within the law, you will be pretty limited to what boats you can tow with the 3,500-pound towing capacity of the regular 2022 Ford Bronco.

The 2022 Ford Raptor Bronco does give you that additional 1,000 pounds of towing capacity, but even that’s pretty meager compared to most pickup trucks.

I’m a big boat fan, and I’d also love a new Ford Bronco. However, I’d rather have the boat I want and buy a vehicle that’s appropriate for towing it than limit what boat I could have because I insisted on buying a Bronco.

If you have a budget for a vehicle to tow a boat, here’s a table comparing the 2022 Ford Bronco with other vehicles costing similar money to see how the Bronco stacks up. 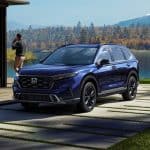 Which is the Better Buy: Audi, BMW or Mercedes? 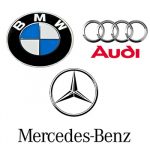