Does a Stolen Car Lose Value?

Used cars have a history and it’s not always a straightforward one. You should always get a vehicle history check done before you buy any used car and these reports can reveal all sorts of things you might not be aware of. One thing a vehicle report could reveal is that a vehicle has been stolen in the past, but what should you do if a report does flag this up and does a stolen car lose value compared to an identical vehicle that hasn’t been stolen?

What is a stolen and recovered vehicle?

A stolen and recovered vehicle is one that has been reported stolen by its rightful owner to the insurance company and law enforcement but is later found and returned to its owner. Crucially, however, not all theft-recovered vehicles are the same and you must know the ins and outs of the situation before you commit to buy one of these vehicles.

Depending on the insurer’s policy terms and conditions and the length of time that passes between the vehicle being reported stolen and it being recovered, the vehicle could either retain a clean title or it could be converted into a salvage title.

Insurance companies will payout to the insured owner of the stolen vehicle for their loss if the vehicle isn’t found and recovered within a certain amount of time, but that period of time will vary from one insurer to another. If don’t know how long this period is with your policy I strongly suggest you check out your policy or speak to your insurer, but it’s usually something like three weeks or 30 days.

As the owner of a stolen vehicle that’s recovered and returned to you, getting it back inside the period of time in good order for it to keep a clean title is good news as it won’t hurt the resale value. On the other hand, if the vehicle is found and recovered outside the period the insurer will pay out as a “total loss,” which could leave you out of pocket.

If you have GAP (Guaranteed Asset Protection) insurance running alongside your auto insurance policy it will make up the difference between what the insurance company pays out for your total loss and what you paid for the car originally. I’m not going to go into this in more detail here but you can learn all about GAP insurance in my article on the subject here.

A vehicle that’s been stolen and recovered that retains a clean title will be worth the same as it was before being stolen unless it’s been damaged by the thieves and repairs have been paid for by the insurance company. In that case, a vehicle history check will show that the vehicle has been involved in an accident and that will harm the resale value.

The stolen and recovered car will have a salvage title even if it’s in pristine condition and there is nothing wrong with it whatsoever, apart from the fact that it’s has been stolen in the past and then recovered. Regardless of its pristine condition, the vehicle will still be worth considerably less money than it would be if it had a clean title.

However, I have to tell you that the overwhelming majority of vehicles that are stolen and recovered will have been involved in an accident of some sort and damaged to varying degrees. In this case, the insurance company will sell to the likes of auto repair businesses that will repair or even rebuild the vehicle if necessary and then sell it on at a profit when finished.

Not all salvage titles are the same

This is where things start to get really complicated. Every state has its own laws regarding salvage titles, so a vehicle that earns itself a salvage title in one state might still qualify for a clean title in another state. That doesn’t make it easy for you as a used car buyer, and it’s another reason why you should always get a vehicle history check before buying a used vehicle.

You see, there’s a practice you need to be aware of called “title washing,” which is where unscrupulous vehicle traders move vehicles to states that have relatively lax regulations around salvage title cars such as New York or New Jersey. They buy a damaged car cheap in one state as salvage and then move it to another where it will qualify for a clean title after being repaired because the regulations are less stringent.

Obviously, as a car with a clean title in the new state, it will command a much higher price than it would have done in the original state where it would have to have been sold with a salvage title.

How much of its value does a stolen car lose?

According to the trusted resource, Kelley Blue Book, a previously stolen car with a salvage title will typically be worth between 20% and 40% less than the book price for the same used vehicle with a clean title.

However, and I cannot stress this strongly enough, you should always get a vehicle that’s been stolen and recovered independently appraised by an expert before you even think about parting with your money to buy it.

Even if one of these vehicles looks fantastic there can be all sorts of things going in underneath you might not know about with a professional inspection.

Although it wasn’t stolen, I once took a Range Rover Sport that looked in great condition as a trade-in against a new Range Rover that turned out to be not all it seemed to be. The bodywork, interior and engine were all fine and the mileage and history report all checked out fine.

Unfortunately, when my service department got it up on the ramp to prepare it for resale they found a huge amount of damage to the underside of the vehicle. I’ll never forget what the master technician said to me when I asked him to describe the damage. He told me, “Imagine if the SUV had been picked up by a helicopter and dropped onto a rock from about 20 feet in the air. That’s what it looks like underneath.”

Even if my sales exec who appraised the vehicle had got on the floor and had a quick look underneath, he probably wouldn’t have been able to see the damage as it was right in the center of the underside of the RRS. It could only really be seen once the vehicle was up on a ramp.

The result was I had to send it to auction as I couldn’t put a Land Rover warranty on a three-year-old prestige vehicle with damage like that to it, and at auction, it went for $7,000 less than I paid for it.

Should you buy a previously stolen vehicle?

You should only consider buying a used vehicle that’s been stolen and recovered if you really know what you are doing or if you have someone with you who does. There is a potential opportunity for you to get your hands on a used vehicle for a knockdown price, but you could also lose your shirt. Does a stolen car lose value? Yes, I’m afraid it does.

If you want to get a used vehicle for the lowest possible price with much less risk involved, government and police auctions can be the way to go. You need to know what you’re looking for to buy at any auction, but this guide is a great place to find used vehicles at incredible prices. 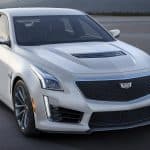 What to Look For When Buying a Used Cadillac CTS

Is it Worth Repairing a Salvage Car? 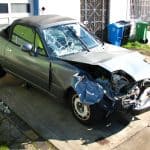