Is it Worth Repairing a Salvage Car?

When you see a used car, truck or SUV advertised for sale at an incredibly low and tempting price it will probably turn out to be a salvage car. While some will have been repaired to various standards and will still look like quite a bargain, others will be in their raw state and any repairs will be down to you. The question for most of you will inevitably be, is it worth buying and repairing a salvage car or should you leave it to the professionals?

What is a salvage car?

A car or any other vehicle that has a salvage title will usually have been damaged in some sort of incident and the cost to repair it will have been close to or more than the car is worth. Every US state has its own rules to define salvage titles, so it’s vital you check the laws where you are so you know exactly what it means.

Just imagine a car is involved in an accident and before the accident it would have been worth $10,000 but after the accident, the cost to repair it is $11,000. In this case, the insurance company would declare the vehicle a “write-off” and pay the owner the $10,000 it was worth before the accident.

To get back whatever money it could, the insurer would then sell the vehicle with a salvage title and it will probably be bought by an auto shop that wants to repair it or a breaker who wants to sell it for spare parts.

In some cases, a private buyer may make an estimate that they can repair a salvage vehicle themselves or get it repaired by someone else and the cost of purchase and repair would still come in lower than buying a similar vehicle that wasn’t damaged and on a salvage title.

As far as I’m concerned, private buyers (unless they are seriously capable auto technicians) should steer clear of unrepaired salvage cars and leave them to the professionals.

If you’ve looked for a used car at a bargain price you might be tempted by a repaired salvage car, which is one of those vehicles I’ve just covered but now it has been repaired and it probably looks just like any other used vehicle. You’ll see this type of vehicle for sale all over sites like eBay and Auto Trader and it should be stated clearly in the advert that it is a salvage car.

Even though they’ve been repaired they still have a salvage title, and that means they are not worth anywhere near as much as an identical vehicle with a clear title. If you see two very similar used vehicles for sale and one is 40% cheaper than the other because it has a salvage title you’d probably be tempted by the cheaper one.

The problem is you don’t know how badly the car was damaged and how much of the repair is purely cosmetic unless you get an expert to check it over. You can get a genuine bargain with a repaired salvage car but you can also end up with a pile of trouble.

Of course, the real danger is finding yourself with a vehicle that should be a salvage car but you bought it with a clean title and paid clean title money for it. This can happen if a vehicle was registered and wrecked in another state but you’ve bought it in a state where laws around salvage titles are laxer.

Obviously, the best way to do the best you can to avoid getting stung is to get a comprehensive vehicle history check done on any used vehicle you’re looking to buy, and even if this checks out, if the deal looks too good to be true it probably is, and in that case, you should get a proper inspection carried out by AAA or another professional.

Benefits of buying a salvage car?

You can get all the checks done I mentioned above, but although a clean bill of health from a vehicle history check and a physical inspection by an expert should give you reassurance, it’s still not an absolute guarantee. Then again, there’s also an element of risk involved with any used vehicle purchase, but there’s a much lower risk with a vehicle that has a clean title.

Of course, there are less risky ways of buying a used vehicle at bargain prices, and that’s by checking out government auctions. The ex-police and ex-government vehicles they auction off are well maintained and often low mileage but to get a chance of buying them you need to know where these auctions are.

They even sell vehicles that have been confiscated from crooks so you never know what’s going to turn up. If you want to know more then click here to learn about government auctions and how to get in on the action.

Who should buy a salvage car to repair?

Only buy a salvage car to repair if you really know what you’re doing. It’s easy to look at a tasty muscle car for sale at a bargain price that just has some damage to the fenders and think it wouldn’t take much to get that fixed. The problem is the damage you can’t see, and only an expert can truly evaluate that sort of thing.

You’d be amazed to see some vehicles for sale at auctions that have been written off by insurance companies. The damage can look pretty superficial, but it could be the accident happened in a way that bent the chassis. A new fender might only cost a few hundred dollars but a new chassis or a proper chassis repair (if possible) could easily cost more than the vehicle will be worth once repaired.

Buying salvage cars is what auto shops and salvage yards do daily, but it’s a huge risk for a private individual and I suggest you forget the idea completely.

What about cars with rebuilt titles?

Even so, they’re a much better idea for retail buyers and they’re not as much of a risk as a salvage title car.

In general, it will cost you more to insure a salvage vehicle than an equivalent vehicle with a clean title. Also, if you take out full coverage on a salvage car and you suffer a total loss, the insurance company will only pay out around 80% of the vehicle’s salvage value.

If you’re considering buying a salvage car and you’re trying to calculate if it’s worth it financially, you need to consider all factors including the extra cost of insurance.

Is it hard to insure a salvage title?

It can be hard to get insurance coverage for a salvage title vehicle in the first place, as well as it being generally more expensive overall. Even though the majority of insurance companies will offer some sort of liability policy for a salvage title, many will be hesitant or even completely unwilling to include collision and comprehensive cover.

Can you get full coverage insurance on a salvage title?

It is possible to get full coverage insurance on a salvage title vehicle but it can depend on where you live. For example, it’s impossible to insure any vehicle with a salvage title in California because they’ve been declared a total loss and are therefore considered too damaged to be worth repairing and cannot be driven legally.

It’s not the same in every state by any means but it’s something you need to investigate thoroughly before parting with any money to buy a salvage title vehicle of any sort.

You’re much safer if you avoid the temptation to buy a salvage title car but it’s impossible to say you absolutely shouldn’t ever buy one as every salvage title vehicle is different. If you’re looking at a vehicle for a couple of thousand dollars you’re not going to be taking a massive risk.

But if you’re considering buying a vehicle that would be worth several tens of thousands of dollars with a clean title but it’s for sale at a knock-down price with a salvage title, the potential for getting stung pretty severely can be very high indeed.

Personally, I would never consider buying a salvage title car unless I was buying it as a toy or as a project to work on for fun. I recently considered buying an early Mercedes-Benz SLK because the weather was getting nice and I fancied a convertible. You can pick up early SLKs for very low prices but there are also plenty of later models on salvage titles or rebuilt titles for similar money.

I like the second generation much more than the first generation, but that means model years from 2004-2010 and they were outside my budget apart from those that were salvage or rebuilt titles. As I was only looking for a toy I was happy to consider a salvage car, but if I was buying one as the only vehicle in a household or if I was looking to buy a car for the family I’d steer clear of a salvage vehicle.

Every salvage car is different

If you take the time to read a number of my articles about buying used vehicles here on my site you’ll see that time and time again I stress that every single used vehicle is different, but that’s even more the case when it comes to salvage vehicles.

You could try and argue that two identical 2016 Dodge Chargers with the same miles and full service histories are the same, but they’re not really. One might have done all its miles around town while the other might have done most of its driving on the highway.

One might have had people sitting in the rear seats all the time and they now show significant wear, while the other might have never had anyone in the back and the rear seat could even still have the plastic on it from the factory. I could go on.

Salvage title cars can vary from what appears to be very light cosmetic damage to looking like they’ve been dropped from a Boeing C-17 flying at 10,000 feet, and anywhere in between.

It’s up to you whether you’re tempted enough by one to shell out your hard-earned cash to buy a salvage title car, but at least if you’ve got here to the end of my article you’ll be going into it with your eyes open.

Does a Stolen Car Lose Value?

What to Look for When Buying a Used Mazda CX-30 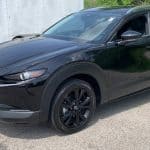