Should You Buy a Used Nissan 350Z?

If you’re in a position in life where you can justify owning a two-seat car but you don’t have an unlimited budget, a used Nissan 350Z could look like an affordable way of owning a genuine sports car for a very reasonable amount of money. The question is, should you buy a used Nissan 350Z, and if you are going to buy one, what do you need to know and look out for?

The Nissan 350Z is a stylish, affordable, reliable sports car that represents excellent value for money in the used market so you should definitely buy one if you want one. Prices are low because Nissan replaced the 350Z with the 370Z in 2009 and that means the 350Z is heading towards classic car status. The Nissan 350Z was every bit as well-made and reliable as the Japanese automaker’s more sensible models of the time, so this is an exciting sports car you can still rely on today.

It was a relatively short window in automotive history where the Nissan 350Z was in production. This exciting two-seat, two-door sports car went into production in 2002 but it was replaced by the 370Z in 2009, so the seven-year production window means there aren’t as many of these excellent sports cars around today as some might imagine.

To begin with, the 350Z went on sale as a coupe-only model for the 2003 model year and it wasn’t until a year later that Nissan gave buyers a roadster option. The first coupes were available in Base, Enthusiast, Performance, Touring and Track trim levels, while the Roadster was initially limited to just Enthusiast and Touring versions.

This front-engine, rear-wheel-drive, two-door, two-seat Japanese sports car wasn’t even born in Japan. In fact, the 350Z was designed by a man called Ajay Panchal of Nissan Design America in San Diego, California in 2000.

The car dutifully followed the Z-Car blueprint of a long-hood short-deck design, and the sloping fastback style arched roofline, unique brushed aluminum door handles, high waistline, and bulging fenders pushed right to the corners of the vehicle gave the 350Z an aggressive look that gave more than a hint of the performance available from this superb car.

Although there’s no mistaking the performance credentials of the 350Z, it was just as much a Nissan as the Maxima or Versa. This meant the 350Z was extremely reliable, easy to work on, and relatively cheap to run and maintain, and now they’re reasonably cheap to buy too.

OEM parts for the 350Z are plentiful and reasonably priced, but as the Nissan 350Z is far more common than many exotic and expensive sports cars, there are also plenty of aftermarket manufacturers producing parts at a fraction of the price of the already affordable OEM parts.

But in January 2005, Nissan introduced the 35th Anniversary six-speed manual and Track versions of the 350Z with a version of the engine that boasted 300 horsepower and 260 lb.-ft. of torque. The standard engine continued to only be offered with a five-speed automatic transmission.

The 2007 model year saw further revisions to the 350Z, and perhaps the most notable upgrade was the introduction of the VQ35HR engine which boosted the Nissan’s output to 306 horsepower and 268 lb.-ft. of torque.

If you’re a serious collector you might want to look out for a 2004 Fairlady Z Type E version of the 350Z. If this is the car for you and you manage to track one down for sale, you’ll have to have seriously deep pockets to get your hands on it because only 5 units were ever built for sale.

These ultra-rare cars feature a longer nose and rear overhang, as well as several add-ons for aerodynamic purposes because they were only produced in Japan for homologation requirements to compete in the Super GT racing series.

NISMO is Nissan’s performance tuning division – like AMG to Mercedes and BMW’s M Division – and it started producing modified 350Z variants right from the car’s launch.

Some NISMO-enhanced cars will have something like the 2004 R-Tune kit that was sold directly to customers and included the likes of new headers, cams, and pulleys that gave significant horsepower gains but void the Nissan factory warranty as it was meant for track racers. Of course, the warranty issue doesn’t matter these days as it has long since expired anyway.

The 2005 S-Tune GT was a bit like those earlier homologation NISMO models, but only 20 were produced each month in Japan and they’re obviously now pretty rare and expensive.

A production NISMO 350Z went on sale through Nissan dealerships in the USA in July 2007, with 1607 units produced for the 2007 and 2008 model years. It was assumed at the time that if there was greater demand, more would be produced, but they would still remain limited to just 10% of all 350Z sales.

What’s so good about the Nissan 350Z?

As well as the reliability and affordability of the 350Z I mentioned earlier, it needs to be stated that part of what makes the 350Z such a great car even today is the fact it still offers a great deal for general everyday use.

Yes, it may have limited practicality in terms of only having two doors and two seats, but the cabin is reasonably spacious so you won’t feel as cramped inside as you would in many other two-seat sports cars. Being above a certain height might rule you out of enjoying a car like the Lotus Elise, but the 350Z is spacious enough to accommodate those who the likes of Lotus don’t appear bothered about.

Although I’m not going to recommend the 350Z as an alternative to a full-size pickup truck for trips to Home Depot to buy bricks or wood for a major home improvement project, the available cargo space is plenty for a decent grocery shop or for running small errands. That’s not something that can be said about a lot of other sports cars.

If you like to enjoy the good weather with a bit of open-top driving, a 350Z convertible is a fabulously affordable way of getting stylish, drop-top driving. Of course, original soft tops are likely to be showing signs of wear and tear after all these years, but because the 350Z is a Nissan, replacement ragtops are cheap and easy to repair or replace.

Don’t be fooled into thinking because the 350Z is an affordable and user-friendly, mass-produced Nissan that its performance will be nothing to write home about because that’s definitely not the case.

Before you start to consider the more powerful later models or the NISMO version of the 350Z, a standard 2003 version has a top speed of 155 mph and a 0 to 60 mph time of 5.7 seconds. Those numbers were seriously impressive back in the day and they’re not too shabby even now.

Some of those horses are likely to have left the stable over the years, especially with high mileage examples, but plenty of 350Zs will have been modified and tuned over the years so some used examples today could be even faster than those original ratings.

I remember one day when I was working in a Land Rover dealership many years ago as a salesman, and I was asked by the general manager to refuel a 350Z that had been traded in against a Range Rover. I was used to jumping in and out of all sorts of different trade-ins, but I’d never experienced anything like that 350Z.

It was a tuned version or anything like that, but as I pulled away from the junction at the exit of the industrial estate I soon realized I was behind the wheel of the fastest car I’d ever driven. I got to the garage and back to the dealership without incident, but I wasn’t going to ask if I could borrow it to go home in.

That’s because I wasn’t convinced I was a competent enough driver to get the car and myself home and back to work again in one piece or without at least some serious and unwelcome interest from the police!

Nissan 350Z known issues to watch out for

Because the 350Z shares a lot of underpinnings with more sober Nissan models, there aren’t any major faults that appear you absolutely have to beware of when looking to buy a used 350Z. It’s not that the 350Z is entirely without fault, but anything that showed up as a recurrent problem was probably dealt with by a recall years ago.

For example, early models developed a fault with the crankshaft and camshaft sensor that was dealt with by a recall. Other faults that people have reported from time to time include a faulty fuel damper that can cause an annoying ticking noise, erratic or high idling after cleaning a throttle body, and a tapping noise or rattle from the timing chain.

The best way to avoid these and any other potential problems is to look for a used 350Z that has a full and extensive service history. If you find a 350Z that’s been well looked after, you could end up with a car that lasts longer than you if you keep looking after it.

You’re not going to get a decent Nissan 350Z for much less than $6,000, and the majority of decent examples tend to start at closer to $7,000. You will find some advertised at $3,000 – $5,000 but these tend to have rocket-ship miles and/or poor service history. Prices of coupes and convertibles don’t tend to differ much from each other, so age, condition, mileage, and history are more important to the asking price than having a soft or hardtop.

Unless you’re looking at a truly exceptional example such as a mint NISMO or other very special edition, you shouldn’t be paying any more than $20,000 for any regular 350Z.

On top of all that, the 350Z is also a very well-equipped car you can live with every day and not some stripped-down track car where air conditioning comes as a convertible roof or a wind-down driver’s window. 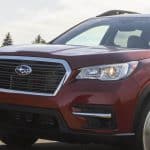 Is a New Subaru Pickup Truck Coming to America?

Everything You Need to Know Before Changing Your Car Color