Do you know what the differences are, and should you buy a Ford F-150 or go for a Raptor? Some people might see the Raptor as just another trim level in the F-150 range of full-size, light-duty pickup trucks, while some might think of the Raptor as a separate model in its own right.

So, what is the difference between an F-150 and a Raptor? Well, both of the descriptions above are correct, to a degree. The Ford Raptor is a version of America’s best-selling vehicle, the F-150 pickup truck. However, Ford does tend to market the Raptor as a model in its own right.

Basically, the Raptor is a high-performance, off-road focused, high-end version of the fabulously successful and popular F-150. The F-150 can be just about anything you want it to be, but the Raptor is a little more mission-specific.

Main Raptor features not found on a standard F-150

Although I like to think of the Raptor as the pinnacle of the F-150 lineup these days, that’s not actually the case if you look at the range as a whole. Although the Raptor does feature pretty high up in the range, and it does have a number of exclusive features, it’s actually a long way from being the most expensive F-150 you can buy right now.

Some features that set the Raptor apart include:

The Raptor isn’t for everyone, of course, and I’m also going to show how the F-150 can be configured in other ways to suit other buyers with different needs. If you’re one of those drivers who never really leave the tarmac in any meaningful way or someone who has towing and hauling capability at the top of their agenda, something else from the F-150 might be a better choice.

How do the engines compare?

There may be more expensive F-150 models than the Raptor with even more comforts, luxuries and specific capabilities, but when it comes to performance, there’s nothing to match the Raptor. Of course, the main source of the Raptor’s incredible performance starts with the engine.

Despite the Raptor having the most powerful engine in the family with the greatest amount of torque, there are other F-150 models that can tow and haul more, but the Raptor is the fastest by some way. The Raptor can get from a standing start to 60 mph in just 5.1 seconds, which is something no other F-150 can touch.

What are the capabilities and limitations of the F-150 and the Raptor?

If I’ve given anyone the impression the Raptor forgoes capability in favor of fun, performance, and off-road agility, that’s not the impression I want you to go away with. The Raptor is a very capable light-duty pickup in its own right, but other F-150s can manage more. The maximum that can be towed with a Raptor is 11,100 pounds, which isn’t bad at all and does exceed the best offered by some of Ford’s light-duty, full-size pickup rivals. When equipped with the non-high-output version of the twin-turbo V-6 you get in the Raptor, other F-150 variants can tow up to a maximum of 13,200 pounds.

Once again, the Raptor is no lightweight when it comes to hauling with a maximum payload rating of 1,520 pounds. If you want to lug around the most an F-150 can handle though, models equipped with the 5.0-liter V-8 can cope with up to 3,270 pounds, which is a big uplift on what the Raptor offers.

Of course, if you want to, you can configure just about any F-150 to handle a bit of the rough stuff for when the tarmac runs out, and it will do a decent job off-road compared to much of the main competition. However, the Raptor isn’t just on another level to other F-150 models in this respect, the Raptor is pretty much peerless in its class.

You may or may not have heard of the Baja 1000 off-road race, but if you haven’t, just think of it as the ultimate test of off-road performance and capability any vehicle could realistically be put through. In 2017, a factory-spec Raptor came third in its class in the Baja 1000, which is an achievement in itself. Unlike other contenders, which had to be put on a trailer and driven back to base, the Raptor completed the race and was then driven around 400 additional miles on public roads to its home back in Phoenix.

The second-generation Raptor actually has a “Baja Mode,” which adjusts the truck’s settings to their most aggressive configuration to cope with the special demands of high-speed driving on sand.

What makes the F-150 Limited more expensive than the Raptor?

As I’ve already stated, you can spec up an F-150 with four-wheel drive and some pretty impressive engines, but if the Raptor is as sensational as it undeniably is, you might be wondering why an F-150 Limited can cost around $15,000 more.

Although the Raptor has stunning styling due to its lifted, widebody stance and other exclusive elements, the Limited can be even more stylish, but in an entirely different way. A range-topping F-150 gets more bling on the outside, and an interior that’s even more comfortable and opulent than the already impressive Raptor’s.

Chrome is a big feature of the F-150 in its Limited trim. The exterior features chrome front tow hooks, LIMITED hood lettering, and dual exhaust tips. It also comes with Satin-aluminum door and tailgate handles, a Satin-aluminum grille with chrome and silver accents, and Satin-aluminum tailgate appliqué.

On the inside, while the Raptor gets a very good infotainment system, the limited comes with a B&O sound system with HD radio technology, 10 speakers that include a subwoofer, and a voice-activated navigation system with pinch-to-zoom capability. The interior of the Raptor is very comfortable and largely very black. Perhaps surprisingly, the Raptor doesn’t get leather upholstery as part of its standard equipment. The Limited does, and then some. The Limited gets premium two-tone leather upholstery, and this is further complemented by subtle use of genuine wood trim around the interior.

Although the Raptor looks fantastic, it’s standard wheels are designed with functionality very much at the forefront of the designer’s mind. The 17-inch wheels the Raptor gets do their job extremely well and look seriously cool wrapped in those big-rugged off-road tires, but once again, the Limited takes the honors in the bling stakes with its stunning 22-inch polished alloys.

It would be easy to assume a focused model like the Raptor would be something of a take-it-or-leave-it proposition, there is quite a bit of scope for personalization. Mechanical upgrade options for the Raptor include a 4.10 front axle with TORSEN differential, an engine block heater, and a trailer brake controller. Those with a penchant for safety equipment might prefer to add advanced safety features such as a 360-degree camera with split-view display, blind spot monitoring or lane-keep assist. Other features found in the F-150 Limited can also be added, like the advanced navigation system, so you can configure a Raptor to come close to rivaling the comfort and luxury of the most upscale F-150.

You can configure a Raptor to do and have much of what any other model in the F-150 family can offer, but only a Raptor can be a Raptor. For the most fun and performance, you can get from a full-size, light-duty pickup truck, the Raptor is beyond comparison. If you have less adventurous and more conventional aspirations for your new truck, you can have just about anything you want in the rest of the F-150 range, and the F-150 can leave the Raptor for dead 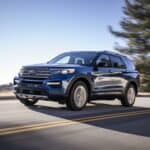 Is Leasing a Car Right For You?

What are the Best Cars for Dogs? 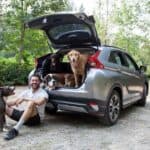