The Chevrolet Equinox is a compact crossover SUV that started life off in 2004 as a midsize, and it’s pretty unusual for a vehicle to get smaller rather than larger these days. It’s not the most exciting or exhilarating model in its class but it’s not the worst of its kind either by any means. If you want to save yourself some money by not buying brand new, here’s what you should look out for when buying a used Chevrolet Equinox.

How many generations of Chevrolet Equinox are there?

So far there have been three generations of the Chevy Equinox and the fourth-generation isn’t expected to arrive until 2024 for the 2025 model year. A refreshed version of the third-generation Equinox was scheduled to arrive for the 2021 model year but that was put back a year due to the pandemic.

The first-generation Equinox went into production in 2004 for the 2005 model year and this midsize crossover was built on the same GM Theta platform as Saturn Vue and Suzuki XL7, although the Equinox was larger than the Saturn.

This was a front-wheel-drive model in its standard form although all-wheel-drive was available, but even the AWD versions should by no means be considered serious off-roaders. The Equinox got updated by GM for the first time in 2006 but a new second-generation arrived three years later.

In June 2009 the second-generation Chevrolet Equinox arrived for the 2010 model year, and the styling was a reasonable improvement on the previous model. It certainly wasn’t an “all-new” model because it was still built on the same platform as its predecessor, but it did feature a couple of engines that gave buyers the option of more power or better fuel economy.

Although the second-generation Equinox didn’t get a full mid-cycle refresh until the 2016 model year, additional features and a new 3.6-liter V-6 engine were added in 2013 that you might want to look out for if you’re looking for a used second-gen model.

When the third-generation of the Chevrolet Equinox was unveiled, someone in Chevy’s marketing department had the bright idea of scheduling the launch for the autumn equinox on September 22nd, 2016. It really is amazing that it took them 13 years to come up with that one!

This model launched with two gasoline engines but a diesel engine was added to the lineup a year later. As I mentioned earlier, a mid-cycle refresh for this one was scheduled for the 2021 model year, but the disruption to the auto industry caused by the coronavirus pandemic meant the updated third-generation Equinox was put back to the 2022 model year.

How popular is the Chevy Equinox?

The Equinox has been a big-seller for Chevy ever since it was launched and sales have been on a pretty steady upward curve since a bit of a hiccup in 2008 when just 67,447 units were sold, compared to 89,552 the previous year. Annual sales rose from just under 200,000 in 2011 to an impressive 346,048 in 2019. Sales dropped back to 270,994 in 2020, but that’s still pretty impressive considering the restraints Covid measure placed on the retail auto business.

Is the Chevy Equinox reliable?

The Equinox has had its problems over the years, but show me a mass-produced vehicle that doesn’t. One of the more common problems reported over the years has been excessive oil use and there have been some issues with lurching, jerking, erratic performance and a whining noise with some transmissions.

Third-generation models really have been pretty reliable and the 2020 Chevrolet Equinox gets four out of five from Consumer Reports in most categories, including reliability. The 2020 Equinox also had the fewest reported problems in its segment according to the highly respected J.D. Power 2020 U.S. Vehicle Dependability Study.

How well does the Chevy Equinox hold its value?

The Chevrolet Equinox holds its value pretty well in the early years and it should only lose around 37% of its original value over the first three years, and almost all of that will be during the first two years as values stay pretty solid for that third year. After the third year, however, prices start to fall fairly sharply and a six-year-old model will probably only be worth about 35% of its original value.

Of course, if you want to get a used Equinox or any number of other used vehicles for bargain prices then I’d recommend you check out government auctions right here.

How many seats in a Chevrolet Equinox?

There’s no third-row seat in the Chevrolet Equinox and there never has been, so all versions of the Chevrolet Equinox you’ll come across will have five seats. Even during the first two generations when the Chevy SUV was classed as a midsize there was no option for a seven-seat so the seating capacity has always been five.

What was the best year for the Chevy Equinox?

The second-generation of the Equinox was pretty good and the 2011 model year is generally regarded as the best of that generation. Although it’s still pretty new and it’s therefore hard to say for sure, the 2020 model looks like it could turn out to be an excellent used buy in years to come.

How much should you pay for a used Chevrolet Equinox?

The Chevy Equinox is pretty affordable even when it’s brand new, but here’s a table of the average minimum and maximum prices thecarconnection.com website says you should expect to pay from the 2008 model year onwards for examples with average miles and in a condition commensurate with the age and mileage.

Is the Chevrolet Equinox good on gas?

Relatively recent versions of the Chevrolet Equinox are fairly economical with front-drive versions with the 1.5-liter turbo-four getting 26 mpg in the city, 32 mpg on the highway and 28 mpg combined. However, earlier models with V-6 engines can be quite thirsty and something like a 2015 model with that V-6 powerplant and all-wheel-drive will only get you around 16 mpg in the city and 24 mpg on the highway.

Which Equinox model years should you avoid?

According to the carcomplaints.com website, the worst year for recorded complaints about the reliability of the Chevy Equinox was 2006 so that’s one you might want to avoid. The first year of the second-generation saw a bit of a spike in complaints too, but that’s probably to be expected with a brand new version of any vehicle as it takes time for the initial niggles to get ironed out.

Is the Chevy Equinox AWD?

Apart from some entry-level models, the vast majority of Chevrolet Equinox trim levels are standard front-wheel-drive with AWD offered as an option. Many new buyers chose AWD so you shouldn’t have much problem finding plenty of all-wheel-drive versions to check out. With third-generation models, the AWD system is a lot more capable than it was with the first two generations but it still doesn’t turn the Chevy into something to rival a Jeep Wrangler off-road.

How safe is the Chevrolet Equinox?

Although the Equinox has never been the very best in its class when it comes to safety ratings, its results over the years have always been pretty close to the best. Because the Equinox is a mass-market car and has to be competitively priced in the market, some of the most high-end safety features are often optional or they can be standard on some of the higher trim levels.

How much can the Chevrolet Equinox tow?

First and second-generation models equipped with V-6 engines were rated to tow up to a maximum of 3,500 pounds. Versions of the Equinox with four-cylinder engines could only manage 1,000 or 1,500 pounds until the 2.0-liter turbo-four was introduced in 2018, and from then onwards you could tow 3,500 pounds again with the Equinox.

How much room is there inside the Equinox?

The Equinox is about average when it comes to interior space. Rear seat passengers have 39.9 inches of legroom back there which is a little less than the 40.7 inches in the Ford Escape but a couple of inches more than the Toyota RAV4’s 37.8 inches. Room for cargo is a little more limited, however, and the 29.9 cu.-ft. of cargo capacity behind the second-row seats doesn’t compare well to the 37.5 cu.-ft. in the Ford and 37.6 cu.-ft. in the Toyota.

What at the main rivals of the Chevy Equinox?

The compact crossover SUV segment is crowded and fiercely competitive and the Equinox was only out-sold in the US in 2020 by the Honda CR-V and the Toyota RAV4. Other compact rivals include the likes of the Kia Sportage, Ford Escape, Subaru Forester, Mazda CX-5 and the Hyundai Tucson.

Should you buy a used Chevrolet Equinox?

If you’re shopping for a used compact crossover SUV and you’re looking for the best bang for your buck then you could do a lot worse than the Chevrolet Equinox. It isn’t the best in its class in any specific area but it’s a pretty decent all-rounder, but it’s definitely not a model that will get your heart racing with excitement. There’s a lot of strong competition in this segment and I think there are plenty of better options than a used Chevy Equinox. 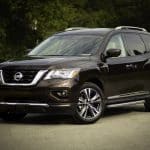 What to Look for When Buying a Used Nissan Pathfinder

What to Look for When Buying a Used Cadillac XT5 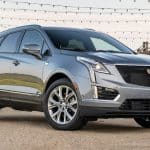