The Hyundai Tucson is a compact crossover SUV that’s been in production since as long ago as 2004 and is now in its fourth-generation, but it’s so much more than that. The Tucson is also a shining illustration of just how far the South Korean automaker has come in the last decade. Hyundai has moved from being a low-rent manufacturer of cheap-and-cheerful cars to now become one of the most respected mass-market manufacturers in the global auto market, with a raft of stylish, capable, high-quality models in its portfolio that all represent excellent value for money.

If you’re in the market for a used compact crossover, here’s some of what you need to know and what to look out for when you’re considering buying a used Hyundai Tucson.

If you want to get a used Hyundai Tucson and other used vehicles for the lowest possible price, government and police auctions are the way to go. You need to know what you’re looking for to buy at auction, but this guide is a great place to find used vehicles at incredible prices.

And if you already own a Tucson or any other Hyundai, it’s definitely a good idea check out the 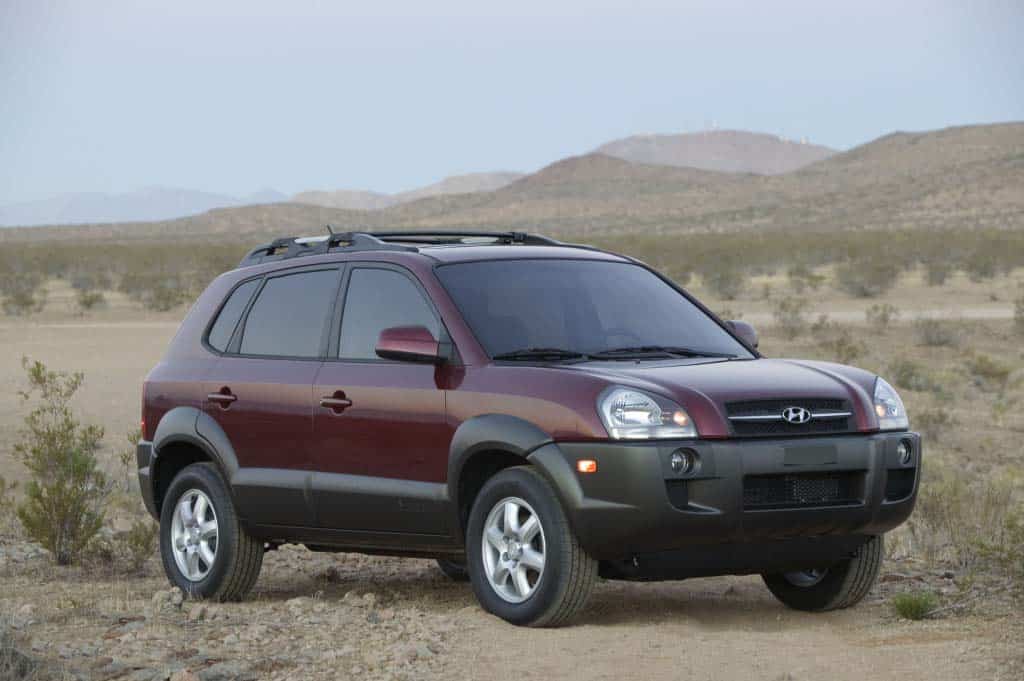 Although the styling of the first-gen Tucson looks extremely dated these days, these were still pretty well-equipped compact crossovers that were extremely good value for money. The quality probably wasn’t up to the standard of European and Japanese rivals of the time, but the Hyundai was always cheaper and therefore appealed to those on tight budgets.

Under the hood, you have the choice of the standard 2.0-liter inline-four producing 140 horsepower and 136 lb.-ft. of torque, or a 2.7-liter V-6 offering 173 horsepower and 178 lb.-ft. of torque. The four-cylinder engine came mated to a five-speed manual transmission while the V-6 engine came with a standard four-speed automatic instead. All versions were standard front-wheel-drive with four-wheel-drive available as an option.

You should be able to pick a decent first-gen Tucson up for very little these days, so they can make good first vehicles for young new drivers looking for their first ride. If you want to know exactly what trim levels come with which features, here are the brochures for you to download free for 2005, 2008 and 2009 model years of the first-generation Tucson:

If you’re considering buying a used Tucson and you’re not working to the most extreme low budget, a second-generation model is probably where your search should start. In some markets around the world, this model was called the Hyundai ix35, but here in America and in several other regions, it continued to be sold under the Tucson name. It went into production in 2009 and went on sale as a 2010 model year and remained on sale up to and including the 2015 model year.

The second-generation 2010 Tucson was only available in GLS and Limited trim levels, and both were powered by the same 2.4-liter four-cylinder engine that put out 176 horsepower and 168 lb.-ft. of torque. GLS models came with a six-speed manual transmission but the Limited was upgraded to a six-speed automatic instead.

A lot of GLS models on lots will have the automatic transmission as it was an option for the base model most dealers will have ordered. One of the good things about the second-generation for used buyers is there’s no significant facelift to worry about. If you find a low-mileage 2010 model in good condition it can easily pass as a 2015 model.

If you want to know exactly what trim levels come with which features, here are the brochures for you to download free for every model year of the second-generation:

When the all-new third-generation of the Tucson was unveiled at the Geneva Motor Show on March 3, 2015, it really did mark the start of bigger things for the brand and this model in particular. The exterior styling was cutting-edge for the time and looked as fresh as the day it launched right up until a relatively light refresh for the 2019 model year.

Powering this version of the Tucson was a standard 2.0-liter four-cylinder engine producing 164 horsepower and 151 lb.-ft. of torque mated to a six-speed automatic transmission. If you’d like a little more power and performance you can also have a second-gen Tucson with a 1.6-liter turbo-four that develops 175 horsepower and 195 lb.-ft. of torque through a seven-speed dual-clutch transmission. As usual, both engines were available with the standard front-wheel-drive or the available all-wheel-drive format.

Although the 2019 refresh was modest in terms of aesthetics, significant changes were made to the available powertrains. The base 2.0-liter engine was retained, but the 1.6-liter turbo-four was dropped in favor of a 2.4-liter naturally aspirated four-cylinder producing 181 horsepower and 175 lb.-ft. of torque. Front-wheel-drive was standard with AWD available across the lineup, but every version of the refreshed Tucson utilized a six-speed automatic transmission as the seven-speed DCT was dropped.

An early third-generation Hyundai Tucson can be a great used buy as there as masses of them available and that means there are bargains to be had out there. It’s always nice to have a facelifted model of just about any vehicle, but you won’t feel as though you’re driving something dated with a pre-facelift third-gen Tucson.

If you want to know exactly what trim levels come with which features, here are the brochures for you to download free for every model year of the third-generation:

This is where things start to get a little complicated for those of us who are obsessed with different model years of the vehicle we’re looking at. Although there is a 2021 model year of the Hyundai Tucson that’s a continuation of the third-generation, in early 2021 a 2022 model year goes on sale which is the first version of an all-new fourth-generation Hyundai Tucson.

What’s special about the Hyundai Tucson?

There’s nothing remarkable or particularly special about the Hyundai Tucson; it’s just a vehicle that’s extremely good at being what it’s supposed to be and doesn’t try to be anything it isn’t. The third-generation is where the Tucson really took off in a big way due to its enticing blend of style, quality and tremendous value for money. Although even the third-generation may not be the very best in its class in specific areas such as interior space, comfort, performance or fuel economy, the overall package and what you get for your money makes it hard to beat.

Potential Hyundai Tucson problems to watch out for

Engine failure – The only problem you really have to watch out for with a used Hyundai Tucson is engine failure, so it’s not something to be overlooked. This problem goes right back to the first-generation Tucson but it also continued into the second-generation. Thankfully, although a replacement engine was often the only fix, it was usually taken care of under warranty.

The problem usually occurs around 95,000 miles and the worst model year for these problems was 2012. If you’re looking at a used Tucson of around that age that has done fewer than 95,000 miles and there’s no record of the engine being replaced in the service history, an expert vehicle inspection might be a wise investment before parting with your money.

Transmission issues – It’s probably fair to say the seven-speed dual-clutch transmission found in some third-generation Tucson models wasn’t Hyundai’s finest hour. You’ll come across plenty of 2016, 2017 and 2018 Tucsons with the DCT, but it’s not the transmission itself that can be the problem. The real issue lies with the application logic, which can stop the vehicle from moving when the gas pedal is pressed more than once. However, in 2016 a service recall was issued by Hyundai for the software to be reprogrammed, so as long as the service history shows this update has been carried out you should be fine.

I have extensive experience with the seven-speed DCT in a 2016 Kia Sportage, and I have to say it’s not as enjoyable to use as a standard automatic. If you have the choice between a used third-gen Tucson with the DCT and a similar one with the automatic, I’d opt for the automatic.

How much should you expect to pay for a used Hyundai Tucson?

Is the Hyundai Tucson all-wheel-drive?

The Hyundai Tucson comes standard with front-wheel-drive but all-wheel-drive is available across the entire range as an option.

Is the Hyundai Tucson a reliable car?

The Hyundai Tucson has a strong record for reliability and it’s definitely a reliable car, especially third-generation models. According to Consumer Reports, the 2019 Hyundai Tucson is the most reliable SUV in its class with a rating of 4 out of 5.

How much can the Hyundai Tucson tow?

Towing isn’t the strongest attribute of the Hyundai Tucson, but if you do want to tow with a Tucson the maximum rating is a modest 1,000 pounds.

Is the Hyundai Tucson good on gas?

The Hyundai Tucson has always been pretty good on gas for an SUV. Here are the best EPA fuel-economy ratings for each of the first three generations:

Does the Tucson hold its value?

The Hyundai Tucson holds its value reasonably well for a mass-market model that’s as common as it is, and that’s probably because it represents such outstanding value for money as a brand new buy. According to caredge.com, a three-year-old Tucson retains almost 68% of its new price, while a five-year-old model’s value is about half what it cost new.

Does the Hyundai Tucson come with a good warranty?

Along with Kia, Hyundai offers what most regard as the best new car warranty in America. A new 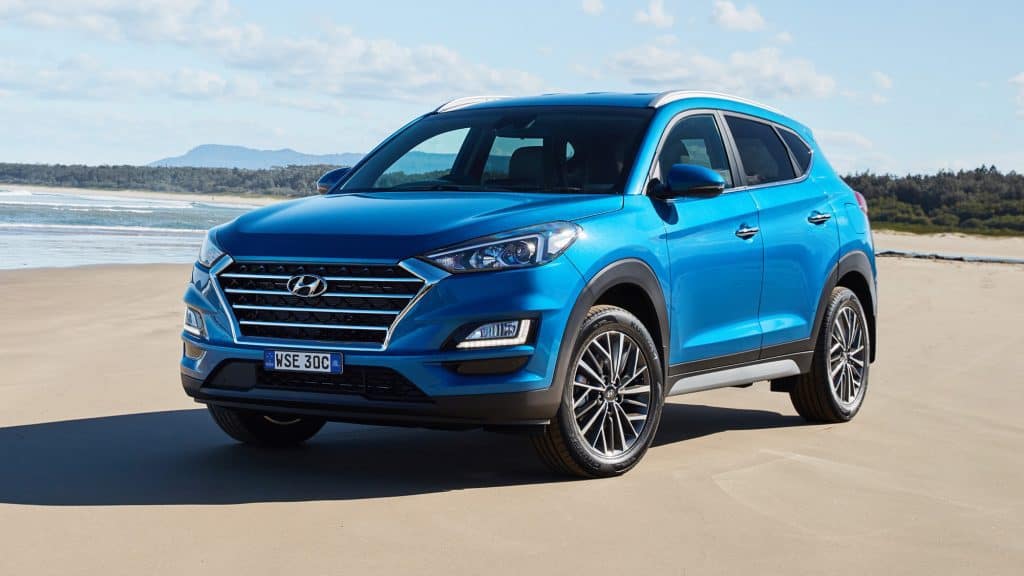 The Hyundai Tucson faces a huge amount of fierce competition in the compact crossover SUV segment, but it’s better than most and at least holds its own against the rest. The two big rivals that can make a case for being potentially better than the Tucson are the Toyota RAV4 and the Honda CR-V, although both are more expensive than the Hyundai.

Other rivals to consider include the Ford Escape, Nissan Rogue, Acura RDX, Subaru Forester, Mazda CX-5, Volkswagen Tiguan and the Chevrolet Equinox. However, the closest rival to the Hyundai Tucson is inevitably the closely related Kia Sportage. When it comes to deciding between these two stablemates it basically comes down to which one you like the look of the best.

Should you buy a Hyundai Tucson?

If you like the look of it and it fits your budget then yes, you absolutely should buy a

link to Should I Buy a Used Hellcat?

2015 Dodge Challenger SRT Hellcat Few names in the American auto market that have arrived over the last few years are as evocative as the Hellcat, but have you ever wondered whether it's worth...

Continue Reading
link to What's the Point of Paddle Shifters?

If you've looked into buying a new car, truck, SUV or van with an automatic transmission lately, there's a good chance that you'll have come across paddle shifters. Whether you have or you haven't...

I'm Sean Cooper and I'm the guy behind carbuyingandselling.com. I worked in the retail auto industry for over a decade before becoming a full-time freelance automotive writer and journalist. I've lived, eaten and slept buying and selling cars for almost two decades now, and this website is my chance to help you buy and sell vehicles better by telling you what I know.

This site is a participant in the Amazon Services LLC Associates Program, Max Bounty, Flex Offers, CJ Affiliates and other affiliate advertising programs designed to provide a means for sites to earn advertising fees by advertising and linking to Amazon.com and other partners. We are compensated for referring traffic and business to Amazon and other companies linked to on this site.