What to Look Out for When Buying a Used Nissan Rogue

The Nissan Rogue is the Japanese automaker’s biggest-selling vehicle in the United States, so what do potential buyers need to know when it comes to buying a used Nissan Rogue? It may be called the Rogue but this is no rogue car by any means. Here I’m going to address some of the questions you might have before deciding whether to buy a used Nissan Rogue, as well as helping you decide which version of used Nissan Rogue is right for you if you do eventually decide to buy one.

How long has the Nissan Rogue been in production?

The Nissan Rogue is a compact crossover SUV that went into production in 2007 as a 2008 model year offering. The majority of Rogue models are produced at the Nissan Smyrna assembly plant in Tennessee, although some versions of the Rogue have been built at the Shatai’s Kyushu Plant in Fukuoka, Japan as well as at the Samsung Motors plant in Busan, South Korea owned by French manufacturer Renault.

Why is the Nissan Rogue so popular?

The Nissan Rogue is popular because it’s an attractive compact crossover SUV that offers great value for money to both new and used buyers. Even in its higher trim levels, the Rogue is an affordable SUV, and every version comes very well equipped with standard features and equipment.

How popular is the Nissan Rogue?

When the Rogue was launched in 2007 its sales figures were relatively modest, but by 2017 Nissan was selling more than 400,000 units of the Rogue each year in America and a further 40,000+ per year in Canada. The Nissan Rogue is a bigger seller in North America than the Chevrolet Equinox, but it isn’t quite as popular as the market-leading Toyota RAV4.

How many generations of Nissan Rogue are there?

If you want to get a used Nissan Rogue or other used vehicles for the lowest possible price, government and police auctions are the way to go. You need to know what you’re looking for to buy at auction, but this guide is a great place to find used vehicles at incredible prices.

How well does the Nissan Rogue hold its value?

Like many vehicles, the value of the Nissan Rogue positively plummets in the first two years, but the decline in residual value tends to flatten off after that initial two-year nosedive. If you buy a Rogue that’s two years old or older you shouldn’t feel too much pain when you eventually come to resell.

How much does a used Nissan Rogue cost?

A used Nissan Rogue can be a very good value-for-money purchase as long as you buy wisely. It’s worth spending a little more to get a higher specification if you can afford it, especially with older examples. Here are the minimum and maximum average prices you can expect to pay for a used Nissan Rogue from the 2008 model year onwards.

Is the Nissan Rogue reliable?

I know it’s a bit of a cliché to say that Japanese vehicles tend to be reliable, but clichés often come about because they begin with a strong element of truth and that’s definitely the case here. While you will always be able to find individual reliability horror stories with any vehicle, on the whole, the Nissan Rogue is a very reliable car and even has a higher predicted reliability rating than the Toyota RAV4.

Does the Nissan Rogue have transmission problems?

A common symptom is the Rogue refusing to go beyond the 3,000 rpm mark due to a lack of power, especially when going up an incline. It tends to be an overheating problem, and a replacement transmission will cost between $1,000 and $6,000 if not covered by a warranty.

Which Nissan Rogue model years should you avoid?

The Rogue has got better and better over the years and you shouldn’t have a great deal to be concerned about with later models. According to the website nissanproblems.com, the worst year for the Rogue was 2013. That was the first year of the second generation so it looks as though Nissan hadn’t quite got things together when that model first went on sale.

The following year saw almost as many faults as the first, so you might want to steer clear of the 2013 and 2014 models as well as the now-aged first-generation altogether.

What’s the fuel economy of the Nissan Rogue?

The Nissan Rogue has always been known as a fairly fuel-efficient model, and if fuel economy is something that concerns you there are even hybrid versions out there in the used market. If you’re looking at something like a 2016 second-generation model without all-wheel-drive you can expect to get something like 26 mpg in the city, 33 mpg on the highway, and 29 mpg combined.

How many seats are in a Nissan Rogue?

In its standard form, the Nissan Rogue is essentially a five-seat vehicle, but you will find models that have an optional third row that increase the seating capacity to seven. It’s almost unheard of for a compact to offer a seven-seat capacity, but you can probably imagine how small those extra two seats are and who they are designed to accommodate, can’t you?

Is the Nissan Rogue AWD?

Nissan Rogue is a front-wheel-drive model in its standard form but all-wheel-drive is available at every trim level. Second-generation models use an intelligent AWD system that automatically senses when there’s a loss of traction for any wheel and adjusts the traction it sends to the other wheels as necessary. The system is designed to give you confidence in less-than-ideal driving conditions or when towing a trailer, but there’s no low ratio and it’s not really suitable for serious off-roading.

How safe is the Nissan Rogue?

The safety ratings for the Nissan Rogue are something of a mix. While the NHTSA only gives the second-generation Nissan Rogue a pretty rare four-star rating for overall safety, the independent IIHS has awarded the Rogue its coveted Top Safety Pick status.

The Rogue has always had a good amount of standard safety features, and later models get standard automatic emergency braking, active lane control, blind-spot monitoring, rear cross-traffic alert, and high-beam assist at every trim level. Rogue SV and Rogue SL models go even further with an expanded suite of safety features that includes the likes of rear automatic emergency braking.

Is the Nissan Rogue fast?

The Nissan Rogue isn’t a fast crossover, but it’s not so slow that its performance should put you off. Vehicles like this and at this price point are never rocketship fast, but you can still get a speeding ticket a lot easier than you’d probably like. The top speed of a 2019 Nissan Rogue is 125 mph and you can get from 0 to 60 mph in 8.7 seconds.

Is the Nissan Rogue comfortable?

As long as you’re not sitting in the optional third-row seats of a Nissan Rogue, you’ll find these SUVs to be pretty spacious and comfortable for up to five adults. The seats are not overly padded and that helps the spacious feel inside the cabin, but they’re not lacking in padding either and they’re surprisingly comfortable.

In the last year of the second-generation Nissan Rogue, there were three trim levels available and the highest of the three was the Rogue SL.

The base model was the Rogue S and the mid-range version of the Nissan was the Rogue SV. Standard Rogue SL features include keyless ignition, power-adjustable heated front seats, and more available options such as adaptive cruise control, a panoramic sunroof, navigation, leather upholstery, 19-inch alloy wheels, plenty of driver-assistance features, and a premium Bose audio system.

Should you wait for a used 2021 Nissan Rogue?

When you see how significant the redesign of the 2021 Nissan Rogue has turned out to be you might want to think twice about buying an older model as the new exterior styling has really dated the previous model. As you will see from the table above, the 2021 model year isn’t a huge saving on a brand-new Nissan Rogue as it hasn’t been around long enough yet.

I’d like to say should put off buying a used Nissan Rogue until the 2021 model has been around another year or so for used prices to get more reasonable. But the current state of the auto business with a shortage of new cars means some are going for above MSRP and used prices are staying sky-high means it might be quite some time before normal business is resumed.

Is a used Nissan Rogue worth the money?

The Nissan Rogue used is a good, solid, reliable, and comfortable compact crossover SUV that won’t break the bank to buy and is definitely worth the money they go for. The styling of the second generation is smart and contemporary without being in any way polarizing, but the looks and performance won’t exactly blow you away either.

There are an awful lot of them on the road so you won’t be buying a particularly interesting or unique vehicle, but the Rogue is great value for money as a second-hand buy and it’s a solid family vehicle you can rely on. As long as you’re not looking for a vehicle to get your pulse racing, the Nissan Rogue is a sound used buy

And if you’d like to know the best price you can expect to get a brand new Nissan Rogue or any new vehicle for, the best thing to do is use the new car quote tool from thecarconnection.com. I’ve been using their website for my new car research for about eight years now, and that site always seems to be right on top of everything when it comes to new car news and reviews.

The total passenger volume inside a 2020 Nissan Rogue is 105.8 cu.-ft., but there’s only 96 cu.-ft. inside the Rogue Sport. Both seat up to five people and there’s almost the same amount of room in the front seats of both vehicles, but the Rogue shows its extra size with 37.9 inches of rear-seat legroom in the Rogue and just 33.4 inches in the Rogue Sport.

The larger and more powerful Nissan Rogue costs a couple of thousand dollars more than the Rogue Sport, but it’s money well spent if you can afford it because I think you get more for your money with the Rogue. 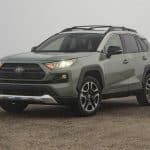 What to Look Out for When Buying a Used Toyota RAV4

What to Look Out for When Buying a Used Dodge Durango