Why has Purple Never Been a Popular Color for Cars?

When you think about car colors certain ones come to mind straight away and the roads are full of vehicles in different shades of the same few colors. Every new car today appears to be black, white, gray or silver, but why has purple never been a popular color for cars, trucks, and SUVs?

Purple cars are few and far between because automakers produce what people want and not a lot of people want to buy purple cars. While deep metallic purples are not uncommon for expensive, exotic supercars and one-off restomods, the potential negative impact on the residual value of a car in such a polarizing color means purple isn’t a popular choice for mass-produced vehicles.

Every now and again an automaker will include some sort of metallic purple in its palette of colors for a new car, but models offered in what most of us would think of as purple tend to either be sporty, youthful or funky. Let’s be honest; when was the last time you saw a purple Chevy Suburban or Lincoln Continental?

The sort of cars you’d probably expect to be offered in some sort of purple would be small cars aimed at a fairly youthful audience such as the Chevy Spark, Dodge Neon or Nissan Juke.

What does a purple car say about you?

Having a purple car probably says you like to be noticed and going under the radar isn’t high on your list of priorities. Purple is generally regarded as a color favored by creative people and those who like to consider themselves as something of an individualist. This analysis is probably close to the truth when we consider the types of cars that are often associated with purple paint.

The kind of hues we normally think of when someone mentions a purple car are deep, rich, and often very metallic or pearlescent, and that can add a hefty premium to the cost of a car. When a production car is offered in a purple metallic it probably won’t be any more expensive than the other metallic colors offered, but if it’s a custom paint job for a restomod the cost of producing a super high-quality finish in purple can be eye-wateringly expensive.

If you do go for a purple custom paint job, especially one of the deep, rich metallics that require many, many coats to get the desired finish, heaven help you if you have a collision and have to get a section resprayed to match!

What color your car is can make a significant difference to the resale value and that’s why many people play it safe by going for those monochromatic colors most of the time. Choosing any color that’s considered to be even a little “out of the ordinary” can hurt resale values, and with so few purple cars around you would be appealing to a very small market if you tried to sell a regular car with a purple paint job.

According to Volkswagen, 71% of US car buyers choose monochromatic paint for their new vehicles but they do think that is going to change with more people daring to be different in the near future.

Due to the pressure of social media to make things stand out more these days, the people in the know at Volkswagen think bolder colors such as purple will be more popular in the future than they are right now. However, if you want to believe that bright colors will soon be more popular than gray, white, black and silver then think again.

Volkswagen’s Senior Color and Trim Designer, Jung Lim “Limmy” Park, says “The future is getting colorful, for sure. Color is always shifting, and our color perception is always evolving depending on what we see, what we observe, and what we live with.”

Even though Volkswagen’s experts believe the public’s interest in inoffensive monochrome cars isn’t going to change significantly, Park has noticed that consumers increasingly want bolder, brighter shades that stand out a bit more, especially on a screen.

Park added, “The colors found on the original Buses and Beetles are iconic to Volkswagen and continue to be recognized even as the colors are no longer in production. The bright contemporary yellow on the Volkswagen ID. Buzz concept is a great example of how the original color image could be reinterpreted for the high-tech and it is not available in other places but in Volkswagen.”

What cars are available in purple?

It’s not as if automakers refuse to offer purple paint as a factory option. You might be surprised at how many cars have had a purple paint option available over the years. The reason there aren’t more of them on the road is simply that dealers and customers rarely order their new vehicles in purple.

Cars that are available in purple tend to be the types of cars that would get you noticed whatever color they are, and having one in purple only makes them even more noticeable. Among the most common purple cars you’ll come across in America are the Dodge Challenger and the Dodge Charger.

The 2021 Dodge Charger and 2021 Dodge Challenger are available in a color called Hellraisin, which is a somewhat subdued shade of purple that’s not too offensive. Previously, Dodge has been well known for a purple called “Plum Crazy” which is a much more vibrant shade than Hellraisin.

McLaren and Lamborghini are also manufacturers who don’t shy away from producing purple models such as the McLaren 720S and the Lamborghini Huracan, which can often be found for sale on Auto Trader or specialist websites in purple.

What if you want a purple new car and it’s not available?

Some modern vehicles would certainly suit a purple paint job and it’s a bit of a surprise that they’re not available from the factory in purple. A few that immediately spring to mind are the new Ford Mustang Mach E and Bronco models, and what about a purple Jeep Wrangler?

Of course, just because the manufacturer of your chosen vehicle doesn’t think it’s worth offering a purple paint option doesn’t mean you can’t have exactly the shade of purple you want. As long as you’re prepared to pay for it, that is.

There are lots of fabulously talented paint shops all around the country that would be only too happy to take your brand new ride straight from the showroom and paint it whatever color you like. And if you go online you’ll find all sorts of used cars for sale where this is exactly what’s been done.

Just do a search on Auto Trader for purple cars and you’ll find plenty for sale that you know didn’t come out of the factory like that. As I mentioned earlier, however, don’t blame me when you come to try and sell your purple pride and joy and find there isn’t as much love out there for your favorite color as you may have hoped.

A cheaper alternative to paint

If the car you want isn’t available in purple but you’re not 100% committed to the cost and permanence of a full-blown respray in the color of your choice, there is a way you can have any finish you want for less than the cost of a respray and returning the car to its original color won’t require another expensive respray.

The solution is to get your car wrapped in a vinyl wrap. It’s still not a cheap option (if you want a proper job done and not a hideous cheap one) but it also isn’t permanent if you don’t want it to be. You’re still probably talking about spending several thousand dollars, depending on the size and complexity of the vehicle, but at least you can remove the wrap if you need to or want to in the future.

You’ll find a lot of purple cars for sale online and the majority of them are probably wrapped as they won’t have been produced in purple originally.

There’s purple…. And then there’s PURPLE

Like most colors, there’s an almost unlimited number of different shades of purple you can choose from that can look extremely different from each other and definitely suit different types of vehicles.

At one end of the spectrum, you can have a very pale shade like heather, at the other extreme you have those incredibly deep, loud, bright metallic purples that builders often choose for hot rods and restomods and can cost as much as a family car just for the paint job.

In between, there are all sorts of different hues, but the lighter ones tend to suit smaller cars. You could definitely see a Volkswagen Beetle in a pale, pastel purple.

But paint something like a Range Rover or a Cadillac Escalade in a color like that, and when it comes to trying to resell at some point, you’ll be looking for a very tiny needle in the world’s biggest haystack to find a buyer.

On the other hand, smaller cars can also suit the kind of big, bold, bright purple that you’d probably want for a larger vehicle, and some of the more tasteful purples around can be so dark that they look like black until you get them in the right sort of light.

Should you buy a purple car?

Taste can be a very personal and individual thing, but it should be blindingly obvious that having a purple car will reduce the number of potential buyers when it eventually comes time to resell. If that doesn’t matter to you and you’re a big fan of purple then go ahead.

However, I’d suggest that if a vehicle really does suit purple then the manufacturer will probably offer it, and if it’s not a factory option it’s probably for good reason. That’s why you can buy a factory Dodge Charger, Dodge Challenger, or Lamborghini Huracan in purple but not a Buick Enclave or Lincoln Navigator. 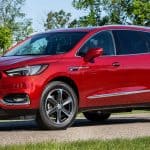 What to Look Out for When Buying a Used Buick Enclave

What to Look for When Buying a Used GMC Terrain 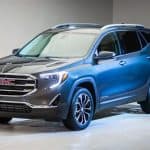